Hamptons bachelors are getting vasectomies

The never ending battle for consequence free sex. While I am sympathetic to these men's motives (a child can cost a man 10s of thousands in child support), I think these men are naive if you think you can get sex without paying a price.

Sex in a committed relationship is an expression of love. Random sex with strangers is always risky and more of a battle between the sexes that damages both people.

In Budapest there is an infamous bar, Central Cellar Restaurant and Wine Bar, that reportedly uses a sexual scam*.

Two women who work for this bar will approach random men on Vaci Utca and ask these men for directions. They will then strike up a friendly conversation and claim to be simple Hungarian girls from the countryside. The girls will flirt with the men and then suggest that they all should get a drink together. One of the girls will just happen to know of a good place, and they all enter for a few drinks.

Happy conversation continues in the pub as everyone has a few beers. Our happy tourists can't believe their good fortune to be randomly approached by Hungarian girls in the street!  But everyone knows that Hungarian girls can't resist Western men. And Hungarian girls are warm hearted unlike those bitchy American or British girls.

Then the bill comes and the girls quietly step away. Our poor tourists are shocked to find that each beer costs $300. Of course, our now upset tourists object to the manager. But the manager explains nicely, with two large Russian thugs beside him, that the bill is final and they have an ATM machine in the back. And he informs them that the local police are not sympathetic to foreigners who try to cheat an establishment and cause a fight.

You get the idea.

To be fair, 99% of the places in Budapest are friendly and honest. And I feel safer on on street in Budapest than I would in Chicago or Baltimore. But there are people who will prey on men's  "free sex" fantasy. No sex is free. All sex has a price.

(*Disclaimer - no, I was not a victim of this scam. I have never been involved with a Hungarian woman.)

One night I was bored and I decided to watch the scam in action. Below are two Brits about to be scammed. 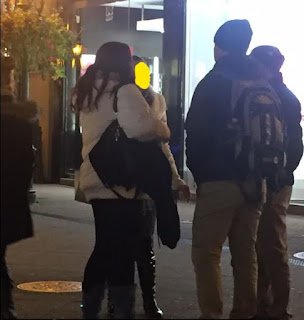 You can read all about this scam here: