Three Trump girls + Scotch And THIS Happened! I Can’t Believe It!

Lauren Southern made a video in which she was black pilled (discouraged) about the success of the Right-wing movements. It is easy for us on the Right to stay in our echo chambers and overestimate our popularity. But even our most popular videos don’t match the normie video views of fake prank videos, and scantily clad girls bouncing around.

But the truth is 90% of people don’t care at all about politics or ideology. They will simply follow whatever is fashionable to think. One day these people are celebrating homosexuality as the highest value and the next day the same people would celebrate homosexual executions under Sharia Law. They will conform to whoever they perceive is in charge and has power.

But the good news is that 90% of the people have 0 influence in politics or cultural trends. As the majority of these people have an IQ under 100, they are not exactly going to debate the finer points of Nietzsche. They just want to laugh at a video of a man getting hit in the groin with a ball.

The people at the margins (both Left and Right) determine the direction of a country.  As such, being on the margin means we will never have mass appeal of crude entertainment. But such mass appeal is not necessary to make a change.

However, we do need to reach some normies, and the most effective way to do so is through entertainment. The Cultural Marxists realized this when they focused on pushing their message in comedy television shows of the 1970s. Shows such as All in the family, MASH, Mary Tyler Moore Show, were more effective in changing opinions than a thousand thousand speeches from Trotsky, On the Right, we must do the same. But the platform now is the Internet, not television.

In many of the industries I worked in the marketing slogan was “pretty up front.” I first heard this when I was a kid in High School working in a restaurant. The managers always put the prettiest girl “up front” as the hostess to the greet the customers. If you were an older woman, or not as attractive, you were expected to work as a waitress or back in the kitchen.

This “pretty up front” tactic was also used in the tech industry for years. Booth babes were used at conventions to attract customers and interest. “Sex Sells” is a marketing truism. 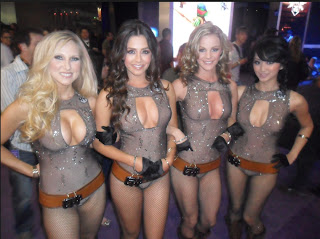 In a similar manner, sex sells for ideology. Below is a gif Rebel Media used for Lauren Southern.  Rebel Media understood this was a more effective way to market Lauren than to post her CV. This was a smart tactic.

However, unlike a Tech Convention, we just can’t have bimbos with no brains to be “up front.” We also need these girls to be smart and articulate. Lauren is both pretty and smart, so she is ideal to put up front. And Lauren is not unique, there are other young women in our movement who are both attractive and intelligent. Lana from Red Ice Radio is one such example.

And this is not “White Knighting” or “Thirst”, it is the cold and calculating reality of how best to market a product or, in our case, an idea.
Posted by RAMZPAUL at 7:35 AM