I am skeptical of most #MeToo sexual harassment allegations unless there is evidence. However, the recent allegations concerning Al Franklin have been verified by a photograph.

Back in 2006, Al Franken thought it would be funny to grab the breasts of a sleeping news reporter named Leeann Tweeden. She said she did not give consent and felt humiliated.


While this is not a rape, it definitely  violates Twitter's new Verified User policy of not engaging in real world harassment.

Twitter recently out sourced their censorship enforcement  to the ADL. 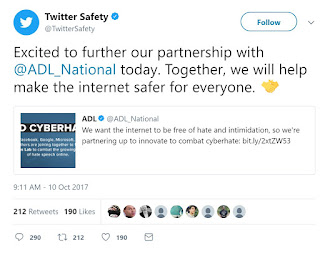 It will be interesting if the ADL holds Al Franken, a liberal Jew, to a different standard. I doubt that they will remove Al Franken's verification. Instead, they will just accuse anyone of questioning this double standard as being an "anti-Semite."