The Alt Right - What went wrong?


Initially the Alt Right was a broad coalition of people who rejected mainstream conservatism. However, the movement was not involved with the old school 14/88 White Nationalism. It was fundamentally identity politics for our people without the neo-nazi baggage.

I published an article on January 5, 2016 that explained my vision of the Alt Right.


Sadly, the movement was co-opted by the Hollywood Nazis once Richard Spencer aligned with the Daily Stormer after the infamous "Heilgate".  I warned Richard about the dangers of associating with these Hollywood Nazis privately and in a video response to him. But he insisted on doing a podcast with Anglin the week after Heilgate.


At that time, The Right Stuff (TRS) also aligned with the Daily Stormer. Weev was involved with their web site administration and Anglin was a frequent guest. Based on that I knew it was impossible to rehabilitate the brand, so I ceased to call myself Alt Right.

The establishment has now used Charlottesville as an excuse to shut down anything remotely associated to the Alt Right. We are now witnessing Soviet tier censorship and clamp down on dissent. 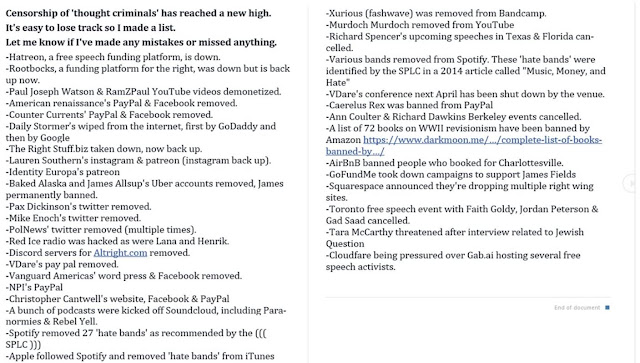